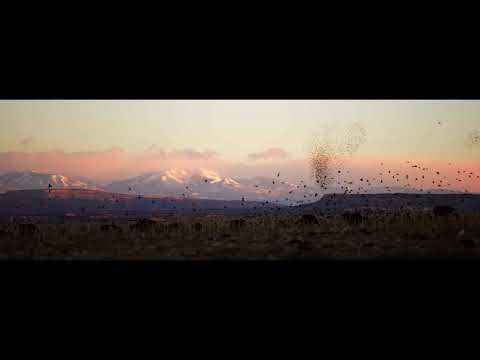 This was the third day of my photographic road trip, the second with photographs. This day saw the winds of Shiprock destroy one Zone VI 4x5 field camera. The day started out well before first light with me taking the wrong road, ending up on some obscure track at the end of a very large hogback ridge. I eventually found the right road, but I was hours and one sunrise late. Distances in this region are deceiving. Where I am from, if you can see it, you can be there is minutes. In this region, if you can see it, it is one damn big rock (DBR). Getting there may take a while. This is what lead to the mistake in navigation, an expectation based upon personal perception not reality. The fact that it was dark and couldn't see squat did not help.

But, when life hands you lemons, make lemonade. Such was the gift the first photographs in this set. These were taken on some road south of Kirkland, New Mexico looking north across the San Juan River valley to the South San Juan Mountains in Colorado. I was treated to a flock of black birds feeding on a cut field of corn. What a site.

Because of the navigation error, I was stuck with full winter sun, very high contrast, harsh light. There was a frigid north wind running better than 30 miles an hour across the desert floor. It was strong enough that it blew over the tripod taking the Zone Vi camera with it. Hence the name of the song "Shiprock Blues". Lessons learned. Never turn your back on the weather. Use weight on the tripod. Luckily, I had packed a Horseman 4x5 studio camera. I would not be hiking with this one, but at least I had a large format camera.

The remainder of the day was spent trying to get somewhere, anywhere on the local roads. None of then seemed to go where I wanted to go. I am thinking that is by design. I can blame the Navajo for that. I did trek up the volcanic dike to a point south of Shiprock. This chewed up a good chunk of the morning but it was worth it. Unfortunately, I left by the same route, though it did lead to other interesting places with also with apparent dead ends. This morning was basically a bust. It would have served well as a scouting trip. A second or third day could have been fruitful. I left shortly after noon. I had reservations in Kayenta, AZ. The Kayenta run should have been saved for a whole day with many planned and unplanned stops.

This song "Shiprock Blues" is a practice session from 2010. It was one of the first recordings with the Taylor PSJM guitar sans pickup. I used a MXL V88 mic run into a Grace M101 pre-amp. The first portion of this song is a bit dicey but comes together nicely. The ending just fell apart.